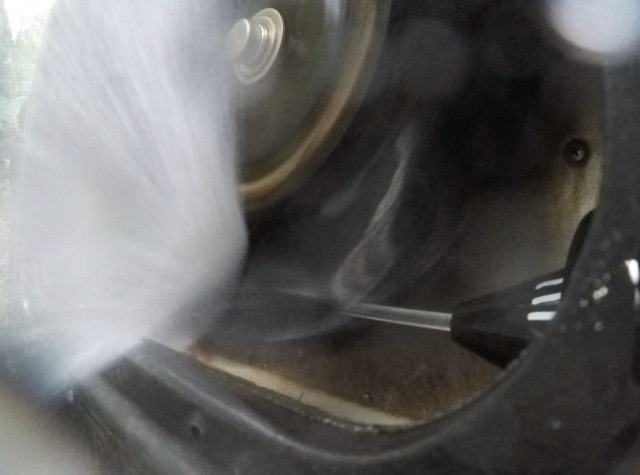 How do I use the electricity my Powerspout generates ?

In January and February my Powerspout produces more electricity than at any other time of year; its power output is usually a constant 924 Watts giving an energy yield of just over 22 kWh per day.

The question I want to answer in this blog post is: how does this electricity get used ?

Below are two plots which show how the power and energy was used on one, unexceptional day last year: the 10th February 2020; the data was captured by the diversion device I use (a Solarcache) which has the ability to record information every 6 seconds to an SD card.

the vertical axis is power in watts; the horizontal axis is the time of day.

the green line represents power being generated; during the hours of darkness, fairly obviously this will only be from the Powerspout, but between 08:30 and 16:00 a variable contribution from solar panels is added giving the spiky appearance mid-way through the day.

power in excess of what is being consumed in the house as 'base load' is diverted by Solarcache to two 'non-essential loads'.

these two non-essential loads are prioritised so that one, a 3 kW immersion heater giving the main house its domestic hot water (DHW), receives power first until the water is up to the temperature of its thermostat;  when power is being fed to this load the plot represents it by the red bars.

when the thermostat opens, Solarcache senses there is no load to supply and starts sending power to the second priority load, represented by blue bars;

this second load is comprised of another 3 kW immersion heater supplying hot water to our 'granny' annexe plus, in parallel with it, a 3 kW storage heater for space heating in the annexe; the storage heater is set to allow air to convect through it at all times so it never gets hot enough for its thermostat to open; in this way the priority 2 load never switches off and is always available to receive excess power.

'base load' consumption in the house at any moment can be determined from the plot fairly exactly by the number of watts by which generation exceeds the power being sent to one or other diversion load; I say fairly exactly because Solarcache always allows a trickle of power to flow back to the grid, of about 40 to 80 W; this amount will contribute to the difference between generated and diverted power and makes it difficult to be precise about base load consumption.

base load is made up mostly of lighting (LED or compact fluorescent) but includes also a Grundfoss central heating pump (48 W), a fridge and a freezer (111 W each) and innumerable switch-mode battery charging devices; we have no TV.

when a power hungry household appliance is switched on, requiring more power than is being generated by the sum of hydro and solar generation, the diversion loads automatically switch off and the extra power needed to supply the appliance is drawn from the outside grid.

the household appliances which make up the power hungry category are: kettle, hob, oven, microwave, vacuum cleaner, washing machine and dishwasher, - the latter two only being power hungry when they are heating water which they have to do as each is only fitted with a cold water supply.

the discerning reader will detect the times when power hungry appliances were in use on 20th Feb 2020 by the white gaps within the red and blue bars.

the provision of DHW in the main house does not only rely on its immersion heater; the tank also has a heating coil which receives hot water from the back boiler of a log burner in our lounge and in winter this is burning 24/7; thus the water quite quickly gets hot enough to open the immersion heater thermostat and for this reason the cumulative energy taken by the priority 1 load is less than that of the second priority load in the annexe.

the vertical axis is in watt hours (Wh); dividing by 1000 gives the more common unit for energy: the kilowatt hour, - kWh, - aka a unit of electricity for metering purposes.

the blue and red plot lines represent respectively the cumulative energy diverted to the house load and the annexe load;

as explained above the priority 2 (blue line) receives the greater share because DHW in the main house receives additional energy from a log burner and can switch off, whilst the priority 2 load can never switch off and is always available to soak up power.

this is how the system works in winter when winter conditions prevail: hydro power is plentiful, the lounge fire is alight and solar power is minimal.

the situation in summer is quite different and will be the subject of a later blog post;

the 'brains' of the system is the Solarcache and it is a huge pity this device is no longer available; mine has been bomb proof since installation 5 years ago and I am not aware of anything being marketed now which has quite the same functionality.

the SD card (8 GB size) which stores all the data has been quietly recording everything since August 2015 and last week covid lockdown stimulated yet another job to be tackled that had long been put off, - I ventured to download the accumulated data; there was 2.3 GB of it with each day accounting for 1.3 MB; considerable patience was needed because it took ages to get the data off the card to my desktop, and then MS Excel went into extra slow mode trying to crunch the figures.

such a huge amount of data is probably excessive but its usefulness is in being able to see how much surplus energy my combined hydro and solar installation yields at different times of the year; such information can help decide whether storing the energy in a battery, rather than use it for diversion load heating, might be a worthwhile road to take.

For the moment, I don't think that is the way I want to go, but if battery prices come down and grid electricity prices go up, at least I'll have the hard data to help me make the decision.

A fuller description of Solarcache is in this blog post.

Repairing and damp-proofing a V-Clamp board

A job, long delayed by uncertainty about how to proceed, has finally been taken off my "to do" list: how to restore Voltage clamp boards which have failed. Time to devote to it happened because of Covid, - a minor bonus in these otherwise difficult times.

Early Powerspout turbines had V-clamp boards to keep voltage within limits when the output from the turbine is to an open circuit; the function of the board is to divert power to a dump load and thereby hold the Powerspout's output to a voltage acceptable to whatever device the turbine is connected to: - either an MPPT controlled battery charger, or as in my case, a grid tied inverter.

When manufactured, the boards were covered with a conformal coating intended to keep the underlying electronics free of moisture, but the coating used was hot melt glue and at low temperatures this becomes brittle, separates from the underlying printed circuit board and develops cracks. Through these cracks, moisture could reach the live circuitry beneath and sooner or later this had terminally disastrous results.

In the early months of my installation in 2013, two boards died in this way; but the years since have been completely trouble free through EcoInnovation having come up with a one-off special, - special in that the board was entirely encased in an epoxy resin block.

So the long delayed job has been to repair the two boards that died, and then to cast them in epoxy, as had been done for the special.

Here, in pictures and captions, is the process:

Conclusion:
The board depicted was installed in the turbine on 7th October 2020 and has so far worked perfectly; it should, I hope, go on working for years to come.
Repairing and epoxying these two boards has not been without expense: the more severely damaged one was beyond my repair abilities and cost £320 to have done professionally. The other board only cost the price of replacing one MOSFET, - a few pence.
Clear epoxy of the type I used is not the cheapest available but I wanted to be able to inspect the encapsulated components should failure occur, - not that repair would be possible once potted.
For each board the epoxy cost worked out at £232.
I did have the option of ditching the present system in which a V-Clamp board is necessary, either by changing to using a Klampit device and continuing with the SMA inverter I use, or by discarding the SMA inverter and changing to one which can accept 600v dc rather than the 400v dc the SMA is designed for.
Either alternative would have meant disrupting a system which has proved bomb-proof for 7 years, and having several spare SMA inverters and V-Clamp boards, I decided to stick with that way of dealing with voltage capping.
Getting to the point of having these two boards repaired and ready for use has been a long journey; for several years I didn't think it was going to be possible; but having done them, and having learned a good deal in the process, I'm glad of having pursued it.
Posted by Bill at Saturday, October 24, 2020 1 comment:

30th September marks the end of the 12 month period I use as my 'accounting year'; it is when I bring together data for how my Powerspout has done.

The graphs below show how it has performed:

Graph 2 shows the cumulative energy, measured in kWh, generated over the 12 month period.

Graph 3 shows how many days in the year a given level of power was achieved. 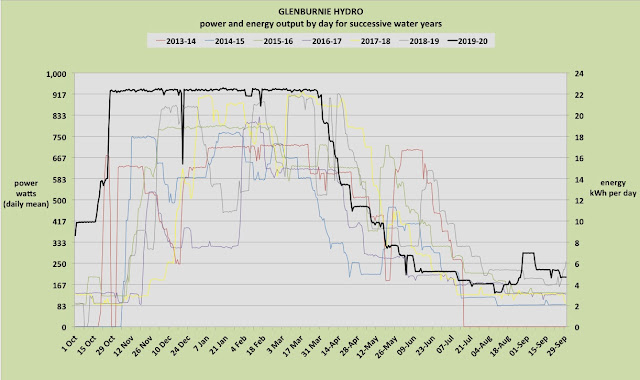 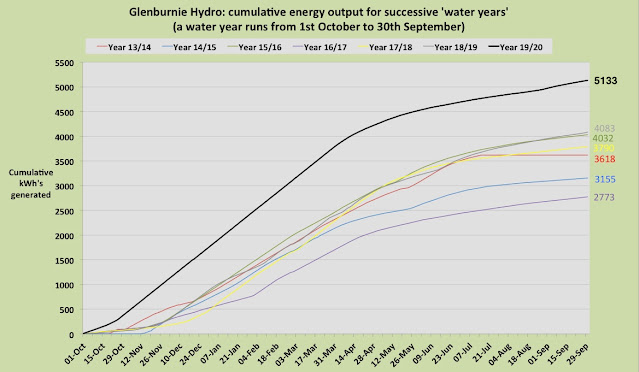 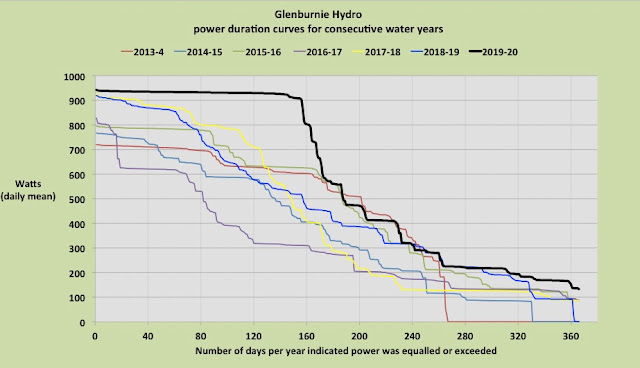